Strong iPhone 7 Plus adoption seen boosting ASP, Apple’s Dec. quarter results — Though iPhone shipments could fall under Wall Street consensus for the December quarter, Apple’s revenue from the product should be boosted by high consumer favour for Apple’s Plus models, an analyst noted on Tuesday. A recent Consumer Intelligence Research Partners survey in the US found that Plus models represented 42 percent of iPhone sales, up from 26 percent a year ago.

Apple Patches 8 Security Flaws in Apple TV with tvOS 10.1.1 — Apple released tvOS 10.1.1 for Apple TV (4th Generation) on Monday. Apple’s general release notes specify only that, “This update includes general performance and stability improvements.” The Security Content document for the update details eight security flaws that were patched.
You can download the update through Software Update on your Apple TV. 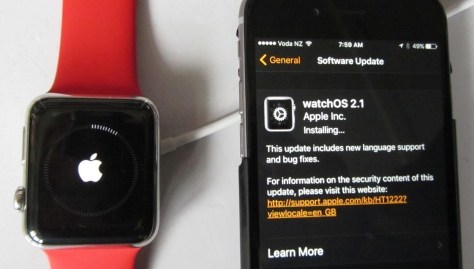 iOS 9.2 should fix the iPad Pro freezing glitch — Apple says that iOS 9.2 should fix a glitch in which the iPad Pro doesn’t respond after a full recharge when you press buttons or tap on the screen, and the screen is black. For everyone else, iOS 9.2 also adds fixes to iCloud Keychain, syncing and pairing of the Apple Watch, and improves audio quality when using Bluetooth streaming to stereo systems. One of the other new features is targeted at AT&T users, with iOS 9.2 now providing support for the AT&T NumberSync Wi-Fi calling feature. This feature lets AT&T customers accept calls on any device even when they don’t have their iPhone nearby.

watchOS 2.1 adds language support, bug fixes — The latest is watchOS 2.1, a 57.1 MB update to the operating system for the Apple Watch. The update requires that your Apple Watch is connected to its charger, charged to at least 50%, and in range of your Wi-Fi connected iPhone. The update then comes via the watch app on the iPhone.

tvOS 9.1 update is here for Apple TV — Now you can use Siri to search Apple Music. And the iOS Apple Remote app works, too, although Siri doesn’t work yet for Apple TV users in Australia or New Zealand, as far as I know (I haven’t actually seen one of these yet). Here’s how to get it.

Scanbot 5 for iOS gets folders, folder sync with iCloud Drive, and more — One of the most useful utilities for iOS just got an update. Scanbot 5 (free with in-app purchases) received new features and functionality that make it an even more powerful tool for scanning and storing documents.

Convoto is the only unit converter iOS app you’ll ever need — Convoto a rarity in this day and age:  unabashedly a unit and currency conversion app, but one of the most comprehensive so far. For one low price (NZ$3.79), the universal build provides a massive list of unit conversions, including off the beaten path stuff like clothing sizes, cooking, and even radioactivity for the science nerds out there.

Cortana for iOS launching on Wednesday, Microsoft announces — Microsoft’s voice assistant, Cortana, will be available on “select” iPhone and Android devices starting on Wednesday, with Cyanogen OS suport coming later this month, according to an official blog post.

tvOS 9.0.1 update for Apple TV is released — Apple today released the first software update for tvOS, taking the 4th-generation Apple tv to version 9.0.1. Apple didn’t supply release notes for the update, so it’s unknown for sure what was in it. Generally early updates of this type include “bug fixes and performance enhancements.”
This Macworld slideshow shows you some tips and tricks if you have an Apple TV 4 already.

Apple shares dive on rumours of weak iPhone 6s demand — Investors sent Apple stock sliding on Tuesday following reports that the Cupertino company may have been forced to dial back orders for its new flagship handsets due to lower-than-expected demand.