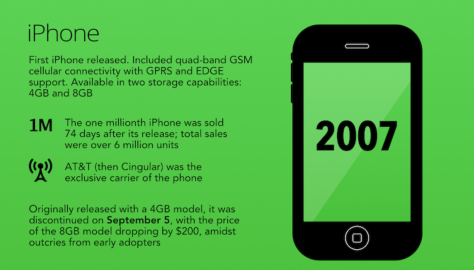 Happy 10th Birthday, iPhone! The concise history of Apple’s smartphone in one colourful infographic — Ten years ago on June 29th, the Apple faithful stood in line, and sometimes slept in line, to be among the first to get their hands on the first iPhones. Later today I’ll be posting some personal recollections of that day, but I thought that it would be a good idea to look at the history of the iPhone. Fortunately, the good folks at SureCall worked up an excellent infographic that colorfully illustrates that history. Click ‘read more’ to see the infographic (that’s a section of it, above), and then scroll down to see it in detail.
iPhone is 10 years old, but its creation was decades in the making. Apparently, Steve Jobs conceived of it 25 years before it was possible to make.

An iPhone switch story from a reluctant Android switcher — The iPhone launched 10 years ago, but Roger switched much more recently, in 2015. On the milestone anniversary of Apple’s groundbreaking handset, he tells his story.

Apple device owners unable to restore from backup as iCloud outage continues — An unspecified service outage that has been ongoing for nearly 36 hours is impacting a small percentage of Apple customers attempting to use iCloud Backup, prohibiting them from creating new backups or restore from previous saves. [And … this is one of the reasons I choose to back up to my Mac, via iTunes, instead. Apart from saving precious iCloud space, since my Mac is backed up in turn, I feel safer this way. And as for ‘connectivity issues’, that’s a problem I can sort out myself with a new cable, rather than very lengthy and sometimes tenuous internet connections managed by who-knows-who.]

Apple to stream WWDC keynote — Apple has announced it will stream the 2015 WWDC keynote on Monday, June 8th [June 9th, NZ time]. You can watch on the web or via the Events channel on your Apple TV.

Expect your future MacBook to have USB-C, Thunderbolt 3 — When the 12-inch MacBook with its single USB-C port was announced, a lot of pundits wondered what the future of multiple port MacBooks would be like. Today at Computex 2015, Intel announced the latest version of Thunderbolt (3) and it uses the same USB Type-C connector found on the MacBook. It can transfer data as fast as 40Gbps. Meanwhile, FireWire is on the way out.

iCloud, iTunes again hit with global outages impacting important services — A Tuesday [US time] iCloud outage has prevented some people from accessing services like calendars or mail, or even logging into iCloud in the first place, according to numerous complaints on Twitter and received by AppleInsider.

Liquidmetal concept could enable Apple to manufacture devices layer by layer — Making use of its ties with Liquidmetal Technologies, Apple on Tuesday won a US patent on a way of manufacturing products layer-by-layer using bulk-solidifying amorphous alloys, also known as bulk metallic glasses.

Rose 2.0 and Satori 2.0 Screensavers (from After Dark) Released as Freeware for OS X — After Dark was the bee’s knees back in the day, a collection of screen savers for your Mac that were fun. Now Stick Software has released Rose 2.0 and Satori 2.0, two abstract screensaver. Both work with OS X 10.9 Mavericks and OS X 10.10 Yosemite. Better yet, they’re freeware.

Mac App bundle for only US $20 — The Summer Mac Essentials Bundle represents 90% off.

How to share a printer with AirPort — That’s the How To from Macworld.