Who has more of your personal data than Facebook? Try Google — Facebook may be in the hot seat right now for its collection of personal data without our knowledge or explicit consent, but as The Wall Street Journal points out, “Google is a far bigger threat by many measures: the volume of information it gathers, the reach of its tracking and the time people spend on its sites and apps.” [OMG I have been telling people for YEARS about how bad Google is! And no, I do not recommend Gmail! Gah!]
But that does not get Facebook off the hook, oh no. A patent filed by the social network describes how personality characteristics, including emotional stability, could be determined from people’s messages and status updates. Facebook says it has never, so far, used the personality test in its products. But the patent was first filed in 2012. [Yeah, we really trust you, Facebook.]

Golden Gate killer tracked down by genealogy DNA — The suspect, Joseph James DeAngelo, 72, has finally been arrested by police. Investigators used DNA from crime scenes that had been stored all these years and plugged the genetic profile of the suspected assailant into an online genealogy database. They found distant relatives of DeAngelo’s and, despite his years of eluding the authorities, traced their DNA to to his front door.

Chinese institutionalised misogyny — A Human Rights Watch report reveals gender discrimination amongst major tech companies, as in the rest of Chinese society, is common and widespread. Search engine Baidu listed a job for content reviewers in March 2017 stating that applicants had to be men with the “strong ability to work under pressure, able to work on weekends, holidays and night shifts.” The conglomerate Tencent, which owns WeChat, the massive game Honor of Kings and a majority stake in League of Legends was found to have posted an ad for a sports content editor in March 2017, stating it was looking for “strong men who are able to work nightshifts.”

Animals who kill us — Mosquitos take the crown, but even cows are pretty bad. Oh, you’re not worried? The cow could be left as the biggest land mammal on Earth in a few centuries, according to a new study that examines the extinction of large mammals as humans spread around the world.

The world is agog at the Koreas talking, but — A new reports suggests the collapse of North Korea’s test facility may have been a contributing factor. Ouch.

Massive Polish Christ suddenly sprouts antenna — Rising 36m in the air, Christ the King is said to be the tallest statue of Jesus in the world. Since 2010, it’s loomed over the residents of Świebodzin, Poland, and it’s apparently already getting some upgrades. Signal broadcasting equipment was recently spotted embedded in the statue’s crown, but no one’s quite sure what’s going on with Jesus 2.0. [Monetising belief – now there’s an idea!]

And OK, let’s have a laugh at Mark Zuckerberg. Why not? He became a gazzlionaire off our data. 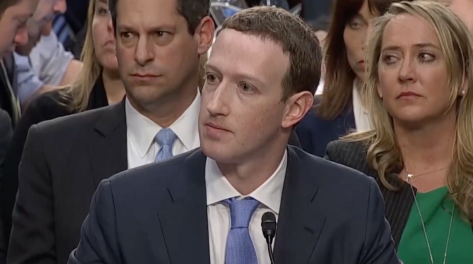