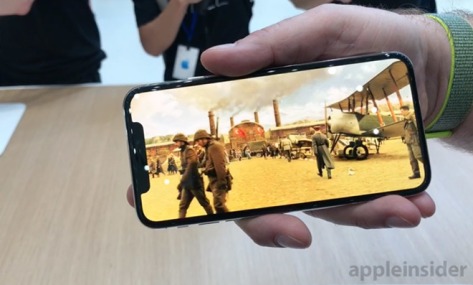 Hands-on with Apple’s iPhone X — Daniel Eran Dilger has seen an iPhone X ‘in the flesh’. Apple released its first major iPhone redesign in three years on Tuesday with iPhone X, a technologically advanced smartphone that boasts an all-new OLED Super Retina Display, TrueDepth camera system, Face ID, A11 Bionic Chip with onboard neural engine and more. AppleInsider went hands-on with Apple’s newest flagship and came away impressed by the handset’s fit and finish. TechConnect has compared it to the even bigger Samsung Galaxy Note 8.

Apple’s iPhone 8 pre-orders will start at 12:01am US Pacific time on Friday — This Friday’s iPhone 8 preorders will start at 12:01am US Pacific time, or 3:01am US Eastern, Apple has confirmed via its website. The time is consistent with Apple’s normal iPhone strategy, and will likely see many US shoppers staying up late to ensure they get an order delivered on the phone’s September 22 ship date. Frequently, launch-day iPhone stocks will run out within hours or even minutes of pre-orders beginning, though later orders may still ship the same weekend.

Apple’s AirPower Charging Mat, Wireless Charging AirPods case — Apple’s surprise products at its ‘Let’s meet at our place’ event were a large wireless charging plate for its new products, and an AirPods wireless charging case. Since they have the Qi standard, this was praised by the Wireless Power Consortium.

Apple quietly cuts price of iPhone SE to $349 for 32GB, $449 for 128GB in the US — While introducing its most expensive iPhone ever, the $999-and-up iPhone X, Apple also cut the price of its smallest and most affordable handset, making it cheaper than ever to purchase a new model. At the same time, Apple discontinued (Product)Red iPhone 7 and raised iPad Pro pricing, plus migrated the sought-after Jet Black finish to lower-capacity 32GB iPhone 7 [Anyone notice price cuts here? Please email me or comment.]