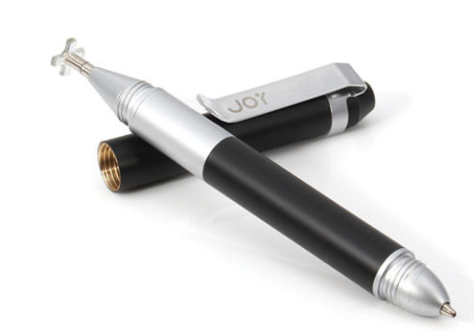 The Pinpoint X-Spring Precision Stylus & Pen is a joy to use — Not everybody has an iPad Pro, but everyone can benefit from using stylus-enabled apps on any iPad. Today’s Apple World Today Deals Shop special is for a combination stylus and pen that you’ll find to be a joy to use. The Pinpoint X-Spring Precision Stylus & Pen from Joy Factory is available for $14.95, 57% off the usual price of $34.95.

Tractica: mobile AR markets to reach 1.9 billion unique monthly active users — Apple is almost certainly planning to enter the augmented reality (AR) market, and now is a good time. Between 2008 and 2015, augmented reality (AR) was a technology gimmick looking for a market.
Now, according to a new report from Tractica, the expanding use cases for mobile AR will lead to growth from 342.8 million unique monthly active users (MAUs) globally in 2016 to nearly 1.9 billion MAUs by 2022.  During this period, the market intelligence firm forecasts that worldwide mobile AR revenue will rise from $749.0 million to $18.5 billion annually, according to the market research group. [Except Apple use to lead tech, not come lately.]

Samsung’s fix for red-tinted Galaxy S8 screens forces users to self-calibrate — With a growing number of complaints about a red-tinged screen in some owners with the Samsung Galaxy S8, the company is issuing a software patch allowing users expanded options for correcting the problem in software by placing the responsibility for colour accuracy even more in user’s hands – in other words, they’re being told how to colour-calibrate their own handsets.

Apple Maps has added transit directions for Paris, France — The apps, for both iOS and macOS, gained the public transit on the weekend, including both the city’s Metro subway and above-ground train lines like the RER and Transilien networks.
Station entrances are marked clearly, and a tap on any stations shows all connecting lines and information on pending departures. In addition to the train systems, Paris transit directions include buses, Autolib car sharing, and Velib bike sharing.

On its 2nd anniversary, Apple Watch settling into role as fitness & notification wearable with Siri, Apple Pay — Originally pitched as a multitude of things, including an intimate communication tool and new frontier for mobile apps, the Apple Watch has been refined and simplified in the two years since its debut, focusing on what Apple has determined to be the fledgling device’s core strengths.