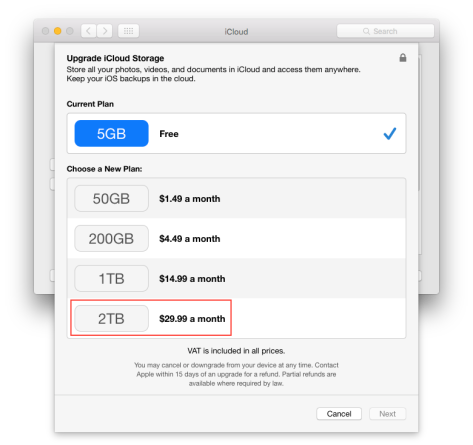 Apple’s iCloud gets 2TB storage tier ahead of iPhone 7 launch — Apple quietly added a 2TB storage option for iCloud subscribers, doubling the previous high end tier. The company added the new level this week, leading to speculation that the company’s September 7th media really will include a new iPhone with 256GB internal storage. [To buy extra (you have 5GB free) storage on your Mac, open System Preferences, click iCloud, click the Manage button, then Buy More Storage and you’ll see the new 2TB storage plan for NZ$29.99 a month/US$$19.99 a month.]

Dropbox hack released details of more than 68M accounts, report says — Dropbox recently notified users of a potential forced password reset after its security team discovered a batch of account credentials believed to have been obtained from a known 2012 data breach. While the initial announcement failed to specify the exact number of impacted users, a report on Tuesday puts the number at well over 68 million.

Geekbench 4 Released for Mac, iOS, and Other OSes — Primate Labs has released Geekbench 4 for OS X (and for iOS, Windows, Linux, and Android) this week. Geekbench is a benchmarking app that will test your device and show how it compares to other devices. The new version includes a new interface, a new structure that allows more features on mobile devices, and new workloads (ie tests for CPU). [Geekbench is one of the few tools that leta you see how Apple device compare in computing power to non-Apple devices.]

Camera Guard for Mac OS X blocks webcam and microphone access — ProtectStar has introduced Camera Guard Professional 2016, a safety software solution for Mac OS X. It’s designed to make sure that no hacker, spy or malware can observe you or listen in on you. It normally costs €$29.90, but is being offered for €$19.90 in the first week of launch. There’s also a free version of Camera Guard available that offers protection of the webcam and safety information over access. [Scroll down on this page to find both version.)