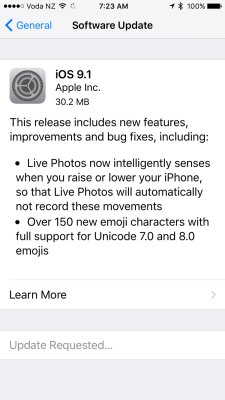 iOS 9.1 — Apple has released iOS 9.1, and it’s available to download through the Settings app now on an iPhone, iPad or iPod touch and can also be obtained through iTunes on Mac and PC. According to Apple, the update includes new features, improvements, and bug fixes, including:
Live Photos now intelligently senses when you raise or lower your iPhone, so that Live Photos will automatically not record these movements;
Over 150 new emoji characters with full support for Unicode 7.0 and 8.0 emojis;
Improved stability with CarPlay, Music, Photos, Safari and Search. The new emoji include a unicorn, new smiley faces, devil horns hand, middle finger, and several other graphics.
Live Photos now senses when you’re lifting your camera so the jerky motion at the beginning of a shot isn’t an issue. Messages now has an option to not show photos for contacts, and the update also includes compatibility for the soon to be released iPad Pro and updated Apple TV.
iOS 9.1 is a free update. You can install it by going to Settings > General>Software Update on your iOS device, or connect your device to iTunes on your computer.

iRig Mic Lav isa Lavalier Mic for Broadcast Professionals — IK Multimedia has released iRig Mic Lav, a cavalier (clip-on) mic aimed at broadcast professionals for recording interviews and the like right to your iPhone. It’s chainable, so you can use two mics for one recording, and you can monitor straight from the device through an audio jack. For the mic itself, the device features an omnidirectional condenser capsule with a 30Hz-16kHz frequency range. It also comes with a foam pop shield, a mounting clip, and what the company calls a “generous cable length.” It’s shipping now at US$49.99/€49.99.

Siri knew it was Back to the Future Day — October 21, 2015 was the day in Back to the Future II where Marty McFly and Doc Brown travelled in their Delorean time machine. To celebrate the date Siri was offering up some well timed responses.

Apple announces opposition to cybersecurity bill ahead of Senate vote — Apple, one of the staunchest opponents of U.S. government efforts to conduct digital surveillance on its public, on Tuesday publicly denounced the efficacy of the Cybersecurity Information Sharing Act, or CISA, just days before the bill goes up for vote in the Senate. Apple says it’s practically impossible to unlock an iPhone for investigators anyway.