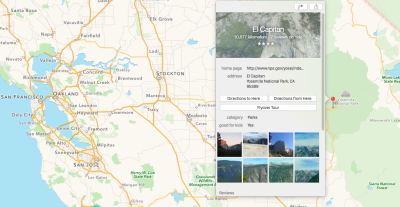 All you need to know about El Capitan — Here’s a handy resource guide that pulls together everything you will want to know right now  about Apple’s new OS X, version 10.11, called El Capitan: Apple’s official info, the beta program, and technical introductions.

Using the Public Folder in OS X — If your Mac has multiple users set up — so your kids can log in under a different account and won’t be able to mess with your stuff, for example — you may have wondered just what you have access to outside of your own user folder and how you can share things back and forth.

Apple camera vehicles shooting for Maps — Apple has confirmed it’s deploying camera-equipped cars to capture data — including images — to improve its mapping service. The cars have been spotted in several U.S. cities over the past few months, leading to speculation that Apple was collecting mapping data to better compete with Google Maps.

Instagram cleans up its desktop site, enlarging photos — Instagram is changing the look of its photo-sharing site on the desktop, streamlining the display of people’s photos while also enlarging them.